My husband worked for three years on this little library. It was a sweet precious gift. I have loved little libraries since my first discovery of them. And little pantries that began in Northwest Arkansa also are such a special also! 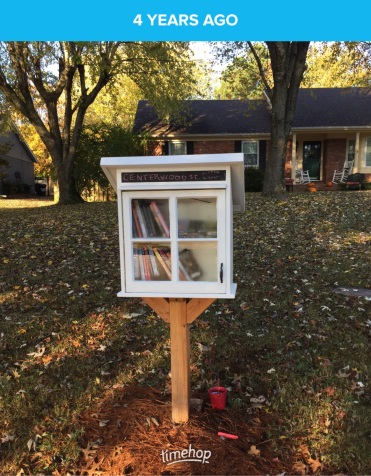 I have dreamed of seeking out all the little libraries in Northwest Arkansas and showing them some love!

Though my big hope is to see a repurposed Star Shopper newspaper box into a little free library in my front yard. I have dreamed of this for years. Renee began the repurposing of the box two years ago. This summer I added to it. It’s basic and not quite finished but it’s finished enough to be put in the yard. Though it continues to sit in our backyard dues to a fight disagreement or whatever else you want to call it between my husband and I. He doesn’t want it and I do. So how do we work this out. Who knows. For now I continue to feel frustrations and feelings of why not. His argument is that he doesn’t think it’s needed it looks trashing and is not willing to put it out until I remove the other plastic star shopper box. And I refuse to remove it. At some point I will drag it out to the curb myself.

I joke that it may be a continue piece of contingency between chris and I. I may drag it out there then he drag it back to the back yard. And back and forth until one of our backs goes completely out and we no longer can do it.

It’s kind of a joke but it really is a huge frustration for me.

I think why not. Is it really hurting anything to have it. Because the fight hurts my feelings. And my not wanting to give in to his requests seems to hurt his feelings. Control is ultimately the issue. Who’s in co trip. Who gets to make the decisions for our house.

It’s my house it’s my street it’s my yard too. In many of my friends relationships they seem to want something and the spouse seems to just agree and do it. Though in my world it feels like I have an idea and I must convince chris to the idea. Sometimes I wish it weren’t so difficult and I could do what I want. In the overall scheme of thing I know I can but I don’t want to hurt his feeling.